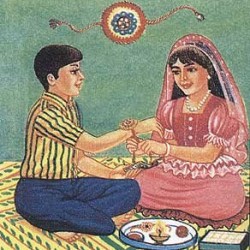 Why do we tie rakhis?

The annual festival of Rakshabandhan, celebrated mostly in India, Nepal and Mauritius, commemorating the abiding ties between brothers/cousins and sisters, usually takes place in late August. It is marked by a very simple ceremony in which the sister ties a rakhi — which may be a colourful thread, a simple bracelet, or a decorative string — around the wrist of her brother.

The word “raksha” signifies protection, and “bandhan” represents an enduring sort of bond. Thus, when a sister ties a rakhi around the wrist of her brother, she signifies her loving attachment to him. In turn, he recognises the special bonds between them and promises to protect her.

The ritual of tying a holy thread around the wrist dates back to Hindu religious ceremonies. Here a kalava or mauli, a sacred yellow and red thread, is tied by the priest during a havan or a pooja on the right (for males and unmarried females) or left (married females) wrist of all persons attending the ceremony. It is meant to invoke the Lord and offer protection against negative influences. It is probably from this ritual that the festival of Rakshabandhan evolved over the centuries.

The Bhavishya Purana refers to a battle between gods and demons. Since Indra was feeling depressed regarding its outcome, his wife Sachi took a thread, charged it with sacred mantras for protection, and tied it on her husband’s hand. Through the strength of this thread, Indra conquered his enemies.

Another incident from the epic Mahabharata concerns Lord Krishna and Draupadi. Once, Sri Krishna cut His finger while using the Sudarshana Chakra. On seeing the blood spurting out, Draupadi immediately tore a strip from her beautiful silk sari and wrapped it around the Lord’s finger to stop the bleeding. Krishna, deeply touched by this action, declared her as His sister and promised to repay the debt. Later, during Draupadi’s humiliation by the Kauravas, Krishna indefinitely extended her sari to save her honour.

According to another legend, when Alexander the Great invaded India in 326 BC, Roxana, his wife, sent a sacred thread to Porus, a Katoch king, asking him not to harm her husband in battle. On the battlefield, when Porus was about to deliver the final blow to Alexander, he saw the rakhi on his own wrist and, giving full respect to the tradition, restrained himself from attacking Alexander personally.

However, the most popular and celebrated story dating back to 1535 CE relates to Rani Karnavati of Chittor and the Mughal Emperor, Humayun. When the widowed Rani realised that she was defenceless against the invasion of Bahadur Shah, she sent a rakhi to the emperor requesting him for protection. Touched, the Emperor immediately took off with his troops, but was too late. Although contemporary commentators and memoirs do not mention the rakhi episode, and some historians have expressed skepticism about it, it is mentioned in a mid-seventeenth century Rajasthani account.

The traditional Indian view holds that once a daughter is married, she becomes part of her husband’s family. The festival of Rakshabandhan was meant to ensure that links with parents, brothers and cousins were continuously maintained. Either the sister visited her parents/brothers’ home or the brothers visited her. In those days, without mobile phones and Internet, this custom ensured regular contact between the siblings, renewing the bonds of love and protection.

Rabindranath Tagore broadened the expanse of the festival to include a celebration of humankind to show fellow feeling and concern. In 1905, Tagore arranged a ceremony to celebrate Rakshabandhan to strengthen the bond of love and togetherness between the Hindus and the Muslims of Bengal to fight against the British Empire. Tagore used white threads and made white Rakshabandhan popular using the festival to spread the feeling of goodwill. Tagore’s vision is very much applicable as it teaches us to think and care for others.

The auspicious day of Rakshabandhan can thus be used as a tool for social change, to envelop everyone in a bond of love and friendship.

Midlife moms: What’s age got to do with it?
Dear 15-year-old me